CEO Accused of Fleeing to Albania With $2 Billion in Funds, Vows to Clear His Name Mathew J. Schwartz (euroinfosec) • April 23, 2021

Has the CEO of the Thodex cryptocurrency exchange in Turkey exit-scammed, fleeing the country with $2 billion worth of his customers' assets?

Critics have accused the CEO of disappearing with up to $2 billion in assets. But in response to allegations that he's fled the country or stolen any funds, Özer says he's been the victim of a "smear campaign" and vows to clear his name after securing additional financing.

Here's what's known: The exchange appeared to experience some problems on Monday, but largely operated normally at the start of Tuesday, with cryptocurrency-exchange tracking site CoinMarketCap reporting that the exchange had been trading more than $585 million in cryptocurrencies. But later that day, users began to report via social media that the exchange had become inaccessible and that they were unable to withdraw funds.

State-run Turkish press agency Anadolu Agency reports that the country's Financial Crimes Investigation Board, known as MASAK, on Wednesday launched an investigation into Özer, and on Thursday, authorities froze the exchange's bank accounts. The agency says the office of Istanbul's chief prosecutor has also appealed for any victims to come forward.

CoinMarketCap reported that before Thodex went offline on Wednesday, it had been trading more than $585 million in cryptocurrencies. (Source: CoinMarketCap)

Attorney Abdullah Üsame Ceran tells Anadolu Agency he filed a criminal complaint accusing Özer of fraud. Ceran says Thodex has about 390,000 active users, and since Tuesday, none have been able to withdraw their funds.

In the post, which is attributed to Özer, he says his technical team is investigating "an abnormal fluctuation in accounts identified last week" affecting about 30,000 of its users. He said the site remains closed as the investigation continues. Özer adds that he has gone abroad as part of late-stage negotiations with new foreign investors and has not fled with the equivalent of $2 billion in assets. He's also said that the exchange expects to make all customers' funds available by Sunday.

"If I had an intention to collect the money and run away, I would illegally take the balances of millions of dollars out of our bank accounts and run with them. All your balances are in our bank accounts," he said.

Özer says Thodex's technical team is designing an interface for users to submit personal documents and request that their funds be dispersed to an international bank account number in return for agreeing to not file legal complaints against the company. "These balances will start being sent to the IBAN numbers you request within a few days," he said in a Twitter post on Thursday.

One ongoing concern with any site that handles large amounts of cryptocurrency is that it remains a target, both for criminal hackers who might gain access and drain users' accounts, as well as for unscrupulous owners, who might do the same via exit scams, in which they literally run away with all of the cryptocurrency (see: Criminals Still Going Crazy for Cryptocurrency).

Hacked Japanese bitcoin exchange Mt. Gox, for example, went out of business after the theft of 650,000 bitcoins, worth around $474 million. Former CEO Mark Karpelès, who maintained his innocence, faced charges of fraud, embezzlement and falsifying data. He was ultimately cleared of all but the latter charge, and received a two-year suspended sentence.

Mt. Gox's users, who sought reimbursement via a Japanese bankruptcy court, got lucky, thanks to Mt. Gox's trustee discovering a number of bitcoins being stored in cold storage. Thanks to bitcoin's value having increased since they lost access to their funds, users appeared set to get a significant portions of their funds returned to them. But users of other hacked exchanges have not always been so lucky.

On April 16, Turkey's central bank announced that it was banning the use of cryptocurrency for payments. The bank said the decision had been made due to the potential for cryptocurrency to "cause non-recoverable losses" for users and also because "they include elements that may undermine the confidence in methods and instruments used currently in payments." 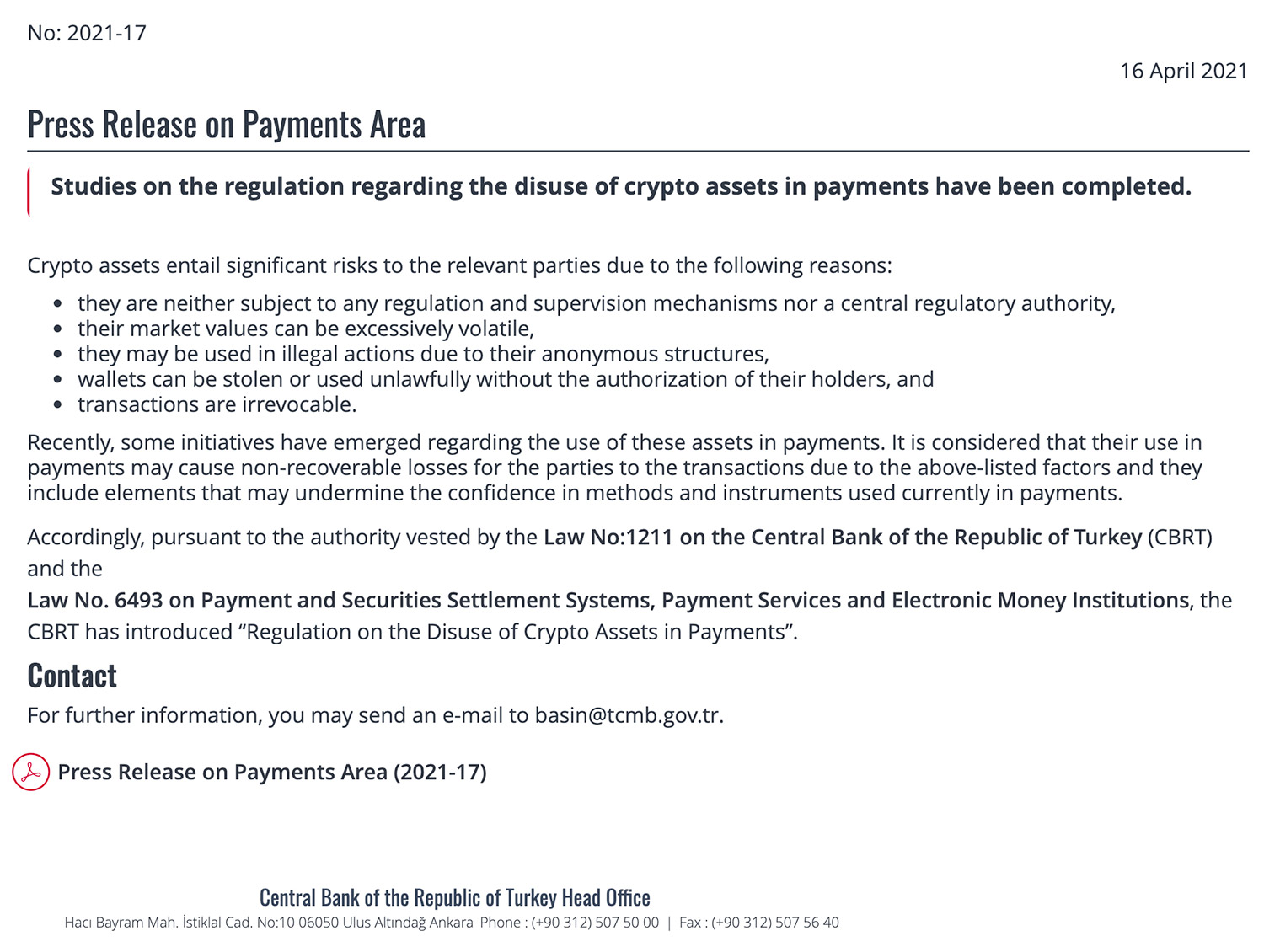 The news appeared to send the value of bitcoin plummeting, with the cryptocurrency losing more than 4% of its value later in the day, Reuters reported.

In recent days, the value of Ethereum and XRP also fluctuated wildly, with both plunging in value on Friday.

"The market has run up quite a bit overall, and it's probably cooling off before the next leg up," Vijay Ayyar, head of business development at cryptocurrency exchange Luno, tells CNBC.

The Impact of Ransomware: On State and Local Government 2022

The 2022 Aftermath of Ransomware on Healthcare