Security firm Symantec warns that at least four online attack campaigns, which all may be the work of one group, have been targeting banks in West Africa since mid-2017.

The attack campaigns have targeted banks in Cameroon, the Democratic Republic of Congo, Equatorial Guinea, Ghana and Ivory Coast, researchers at Symantec say in a blog post.

In a reminder that hackers often do not need to reinvent the wheel, the security firm notes that all of the attacks appear to be using commonly available, off-the-shelf attack tools, together with "living off the land" tactics, which refers to using legitimate tools on an already compromised system to help disguise the attack.

"Commodity malware is readily available on the cyber underground," Symantec says. "While it may not be as powerful or stealthy as custom-developed tools, it does add a certain level of anonymity to attacks, making it harder to link attacks together and attribute them to any one group of attackers."

Previously, Symantec said that it saw few, if any, attackers targeting financial services institutions in West Africa. But in the past 18 months, it's seen an uptick as at least one group - and potentially more than one - has begun targeting organizations in the region.

To date, Symantec says it has seen four distinct attack campaigns targeting West Africa that are continuing. "Branches across at least four financial institutions were targeted in these attacks," Jon DiMaggio, a senior threat intelligence analyst at Symantec, tells Information Security Media Group. "We are not releasing information into the specific organizations but several financial entities were affected."

Symantec says it does not know how much banks may have lost to these attacks. "At this point we know there were targeted attacks against banks in this region and the attacker managed to breach the targets' internal networks. We do not, however, have information into the amount of financial loss that took place," DiMaggio says.

If West Africa had been relatively unscathed by bank hackers, the same cannot be said about all of Africa.

Last October, U.S. cybersecurity firm FireEye warned that a gang of North Korean government hackers, known as APT38, had been waging a sophisticated hacking campaign against banks in Africa and Asia, resulting in the theft of more than $100 million via fraudulent transfers through SWIFT, the global money-transfer network (see North Korean Hackers Tied to $100 Million in SWIFT Fraud).

Also last year, the U.S. Computer Emergency Readiness Team warned in an alert about "malicious cyberactivity by the North Korean government" - which it refers to as Hidden Cobra - that tens of millions of dollars had been stolen from financial services firms in Africa and Asia as part of what US-CERT refers to the "FASTCash" campaign.

Some bank attacks employ malware that has been customized for the targeted environment. In the case of the $81 million heist from the New York Federal Reserve account of Bangladesh's central bank in February 2016, for example, attackers used custom-designed malware designed to alter SWIFT transactions as well as hide them from printouts. That attack has been widely attributed to North Korean hackers. 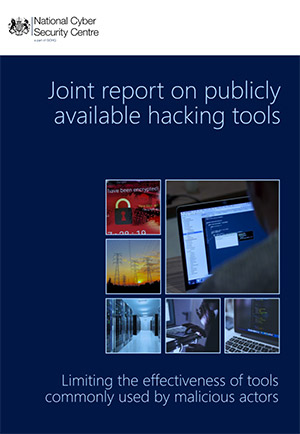 The joint report on publicly available hacking tools released by NCSC includes specific recommendations for how to spot and block such activity.

But many online attacks, including against banks, continue to use commoditized malware and legitimate administrator tools, according to the U.K.'s National Cyber Security Center, which is part of the GCHQ signals intelligence agency.

Experts in all five countries warn that the best way to blunt any online attacks today is to monitor for and block commonly used hacking tools.

"Experience from all our countries makes it clear that, while cyber actors continue to develop their capabilities, they still make use of established tools and techniques," according to the report. "Even the most sophisticated groups use common, publicly available tools to achieve their objectives."

The report calls out five types of commodity tools that organizations should address:

But the report is careful to note that when it comes to network defense, these recommendations should be treated only as starting points. "The individual tools we cover in this report are limited examples of the types used by malicious actors," it says. "You should not consider it an exhaustive list when planning your network defense."

This report has been updated with comments from Symantec's Jon DiMaggio.

Financial Services Industry: How the Rapid7 Insight Cloud Can Help