A federal advisory says Pyongyang is targeting multiple healthcare and public health entities with ransomware and urges affected organizations to take actions to reduce the likelihood of compromise.

Maui ransomware gets its name from the name of the executable file used to maliciously encrypt victims' files. North Korea is a well-known ransomware enthusiast, using it to harvest cash spent on developing weapons of mass destruction. A 2019 United Nations panel estimated North Korean cybercrime netted the hereditary communist regime $2 billion, an amount that has only since grown.

The healthcare sector is an appealing target for ransomware attackers looking for a quick payout, the federal government warns in the advisory, authored by the FBI, Cybersecurity and Infrastructure Security Agency and the Department of the Treasury.

North Korean state-sponsored cybercriminals "likely assume healthcare organizations are willing to pay ransoms because these organizations provide services that are critical to human life and health," the advisory says.

Industry analysis of Maui cited by the advisory shows the executable file appears to be designed for manual execution by a remote actor. The remote actor uses a command-line interface to interact with the malware and to identify files to encrypt. 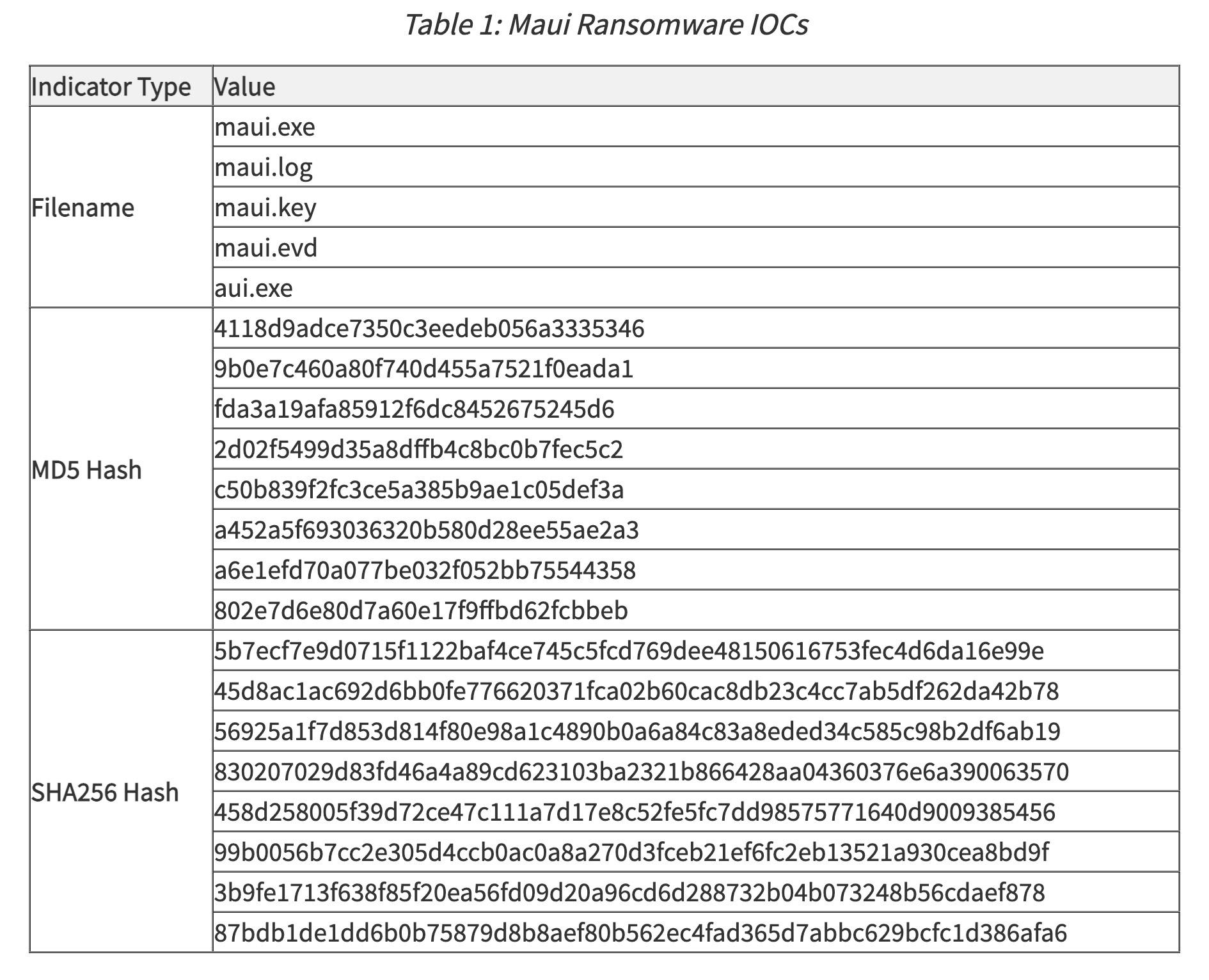 Federal authorities highly discourage paying ransoms. Not only is payment no guarantee that affected files and records will be recovered, but paying the extortionists also may be a violation of sanctions imposed by Treasury's Office of Foreign Assets Control.

Brett Callow, a threat analyst at security firm Emsisoft, says healthcare entities need to be extremely cautious and seek advice prior to deciding to pay a ransom to the Maui operators.

Some healthcare sector entities feel extra pressure to pay extortionists in ransomware incidents in hopes that affected IT systems and data disrupting patient services can be recovered more quickly.

"As the advisory points out, there's a real risk that any payment could violate OFAC sanctions. While it always makes sense to involve law enforcement in incidents, it's especially important in these cases."

"Health-ISAC worked with our Threat Intelligence Committee - a working group of cyberthreat intelligence analysts from member companies - to ascertain any impact to the health sector. We were unable to identify any members impacted by the Maui ransomware," he says.

Nonetheless, it's clear from the government's advisory that law enforcement agencies have identified victims in the health sector, he says.

The information sharing group encourages members to follow the advisory's recommendations and to share any incidents or information related to the Maui ransomware to help better protect the global healthcare community, he adds.

In contrast to more sophisticated ransomware attacks that include hack-and-leak tactics or ransomware with multiple extortion operations, Maui “looks much more manual,” he says. Attackers manually specify the files to encrypt and pull back the encryption keys at execution time.

Maui also doesn't make it a point to boast of its successes, unlike ransomware-as-a-service groups with splashy online presences. ”The Maui ransomware hasn't gotten nearly the level of press that the double extortion and leak groups receive due in large part to the fact that they do not publicize their victims,” Galinkin says.

Victims are understandably not eager to publicize information about their having been victims, making it difficult to know how prevalent the threat is. “That said, there is good reason to believe that the ransomware group has been active for more than a year and has compromised a decent number of victims.”

Jeremy Kennelly, senior manager of cybercrime analysis at security firm Mandiant tells ISMG the company has long tracked financially motivated campaigns being carried out by North Korean cyber operators on behalf of the state, and it is not just healthcare sector entities that are at risk.

"These activities have included a range of schemes including direct bank heists, targeting cryptocurrency, and deploying ransomware, demonstrating the flexibility and persistence of these actors to raise money for the Kim regime,” he says.

The federal alert offers a long list of recommended mitigations to help healthcare and public health sector entities prevent falling victim to Maui, as well as other ransomware threats.

The Maui ransomware advisory is the latest warning from federal authorities concerning ransomware groups and other malware being used to target the healthcare sector.

In June, the Department of Health and Human Services' Health Sector Cyber Coordination Center, or HC3, issued an advisory about the "return" of Emotet malware as an infrastructure-as-a-service offering used by cybercriminal groups as a vehicle to drop ransomware, exfiltrate data and make related attacks on healthcare sector entities (see: Hackers Claim Drug Data Theft as Reports Warn Health Sector).

July 6, 2022 20:42 UTC: This story has been updated to include comments from Erick Galinkin and Jeremy Kennelly.